I have always found TCP congestion control algorithms fascinating, and at the same time, I know very little about them. As an engineer working on the roads, it’s essential to understand the traffic requirement and service levels. Similarly, It’s good to understand the transport behavior riding our networks. Once in a while, I will feel guilty about it and spend time on the topic with the hope of gaining some new insights.

This blog post will share some of my experiments with various TCP congestion control algorithms. We will start with TCP Reno, then look at Cubic, and ends with BBR. I am using Linux network namespaces to emulate topology for experimentation, making it easier to run than setting up a physical test bed.

For many years, the main algorithm of congestion control was TCP Reno. The goal of congestion control is to determine how much capacity is available in the network, so that source knows how many packets it can safely have in transit (Inflight). Once a source has these packets in transit, it uses the ACK’s arrival as a signal that packets are leaving the network, and therefore it’s safe to send more packets into the network. By using ACKs for pacing the transmission of packets, TCP is self-clocking. The number of packets which TCP can inject into the network is controlled by Congestion Window(cwnd). 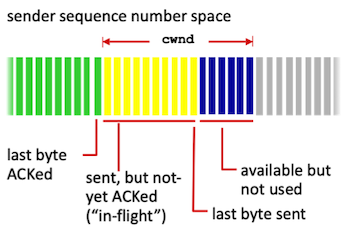 Slow-Start: TCP begins in Slow Start by sending certain number of segments, called the Initial window(IW). This can be somewhere between 2 and 4 segments based on the size of the MSS. For simplicity if we assume IW = 1 MSS and no packets are lost, an ACK is returned for the first segment, allowing sender to send another segment. If one segment is ACKed, the cwnd is increased to 2 and two segments are sent. We can represent this as $W = 2^k$ where k is the number of RTTs and W is the Window size in units of packets. As we can see, this is an exponential function highlighted in red in the graph below.

Fast-Recovery: If there is a packet loss, the TCP sender will receive a duplicate ACK (also called BAD ACks, which doesn’t return a higher ACK number). Rather than going back to Slow-Start, TCP enters the Fast-Recovery state, where it tries to recover from the Packet loss and moves back to the Congestion Avoidance phase once the recovery is complete. Reno Fast-Recovery was improved under New-Reno to handle multiple packet losses. During this state, TCP slows down by cutting cwnd by half, which is the Multiplicative decrease part of AIMD.

Here is the Finite State Machine for the TCP Reno: 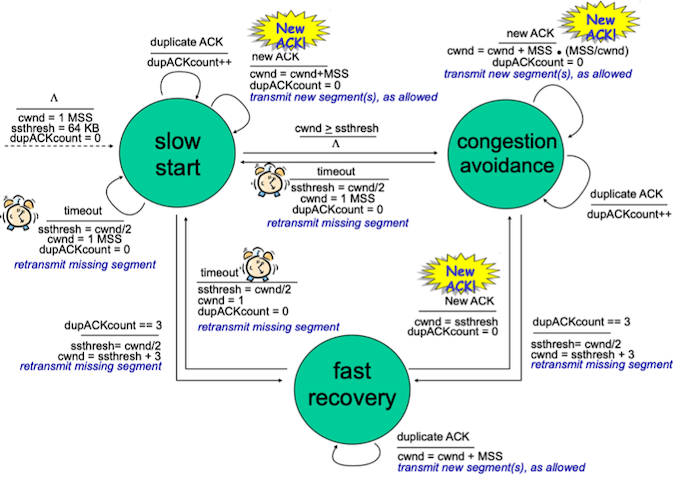 where p is the packet loss probability, $W_{max}$ is the max congestion window size and b is the number of packets of that are acknowledged by a received ACK.

Now let’s get to the fun part. Let’s start with a simple topology of two hosts (H1, H2) connected by two routers(R1, R2). Router R1 has a small buffer of 100packets using FIFO queuing discipline. We will run a single TCP Reno session from host H1 to H2 for 200sec and observe the behavior on R1 and the host.

We collect stats at every 200ms from ss and tc, which should provide a good approximation. Link utilization is calculated by aggregating all the bytes transferred within a second and then converting them to Mbps. The below plot shows the results; the top three subplots show: R1 Link Utilization, R1 Output Queue, Packet Drops at R1, and the bottom two subplots show cwnd, ssthresh, and RTT observed.

The graph shows how TCP Reno fills queues, and you can see the corresponding bumps in RTT as the buffer fills up. As the sender experiences packet drops, the TCP receiver slows down by reducing its cwnd. You can also see the AIMD sawtooth pattern, which emerges in the link utilization. 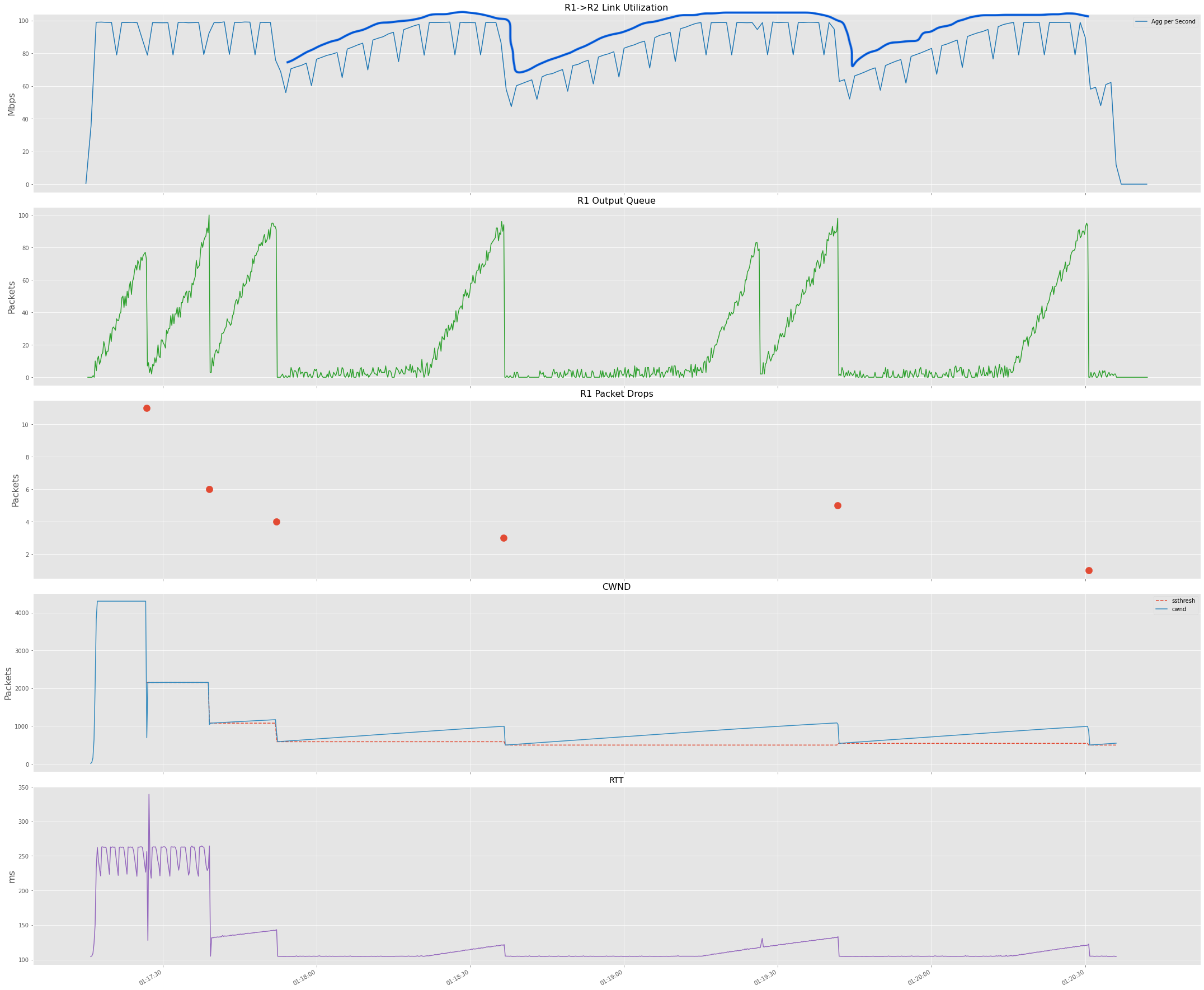 Now let’s add another host pair and have TCP session between H1->H3 and H2-H4 and repeat the experiment.

The below graph captures the results of the experiment. I have added the TCP sending rate for both hosts in this graph as well. In this case, both TCP sessions share the Router queue. We can see that buffer fills more frequently now, which should make sense due to the R1-R2 link being the bottleneck and both TCP senders collectively trying to push the maximum they can.

Also, looking at the TCP sending rate graph, we can see how both TCP sessions regulate each other. 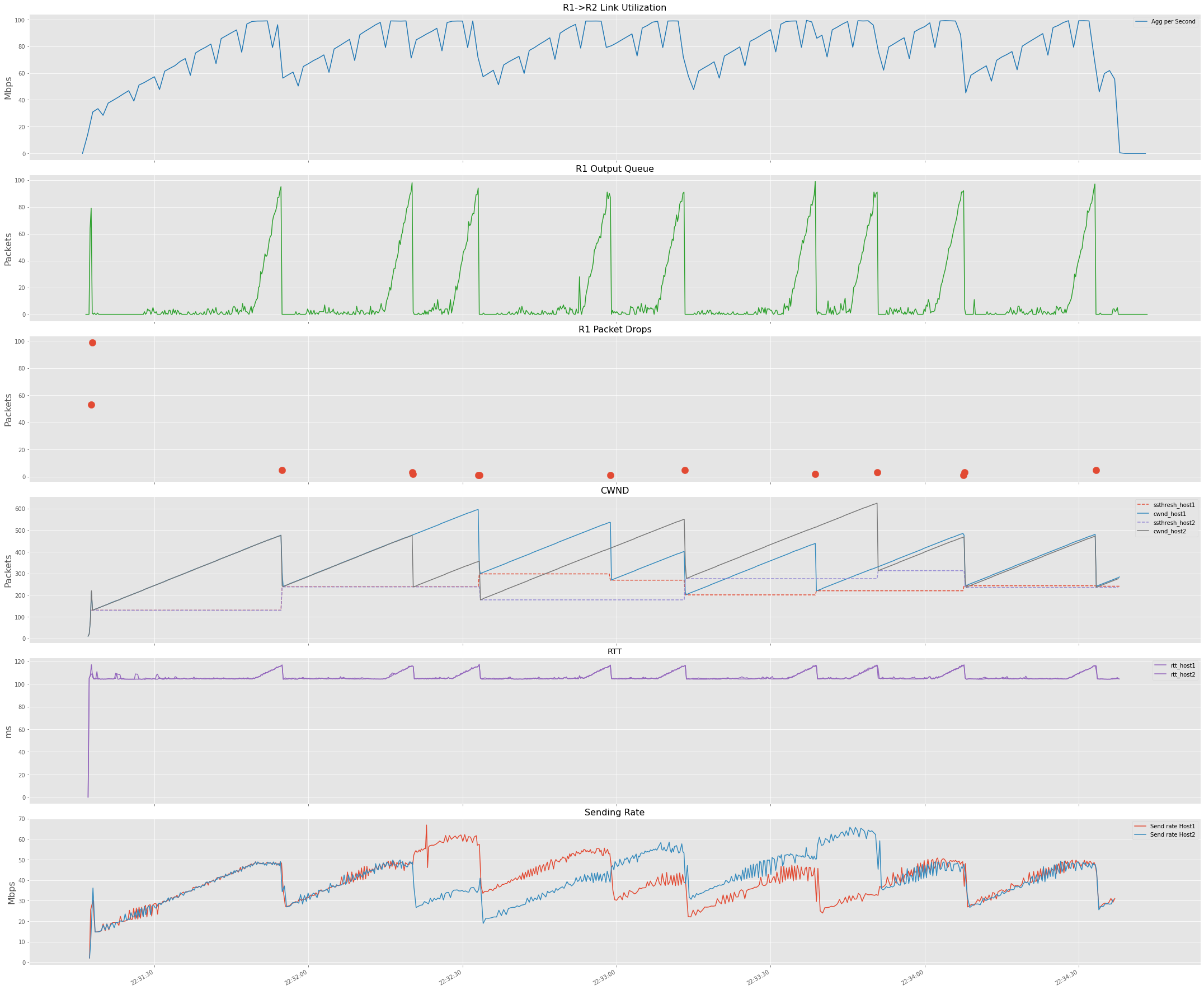 This brings the question of whether Reno TCP flows are fair to each other. Looking at the sum of sending rate for both hosts and percentage contribution of individual flows, We can see both TCP sessions fluctuate around ~50% and the average percentage for both flows is near 50%.

Formally we could also look at Jain’s index for measuring fairness which has the following properties:

Plotting this for our two flows we see that how it fluctuates around 1 which is the perfect score.

We can see that fairness index is not as close to 1 like it was in the previous case. 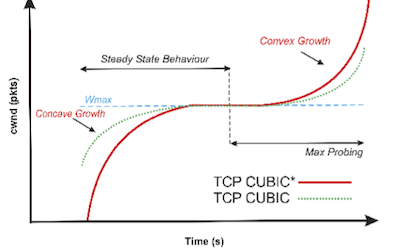 $W_{max}$ represents the window size where the loss occurs. Cubic decreases the cwnd by a constant decrease factor $\beta$ and enters into congestion avoidance phase and begins to increase cwnd size by using Eq. 1 as a concave feature of cubic function until the window size becomes $W_{max}$. The congestion window grows very fast after a window reduction, but as it gets close to $W_{max}$, it slows down its growth; around $W_{max}$, the window increment becomes almost zero.

where C is the scaling constant factor (default=0.4). C controls how fast the window will grow. $\beta$ is the multiplicative decrease factor after packet loss event, it’s default value is 0.7.t is the elapsed time from the last window reduction and K is the time period that the function requires to increase W to $W_{max}$. 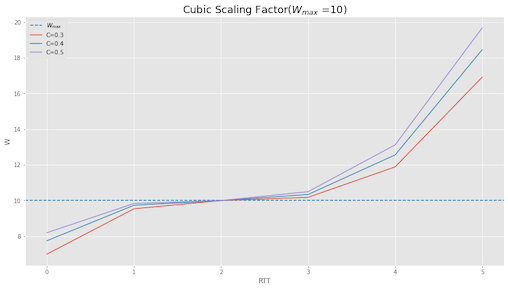 Repeating the experiment for two TCP Cubic sessions, below is the observed behavior. If you compare this with reno session output, you can see that the buffer fills are more frequent, which tells that window growth happens more aggressively. You can also observe the cubic function growth in the cwnd plot. 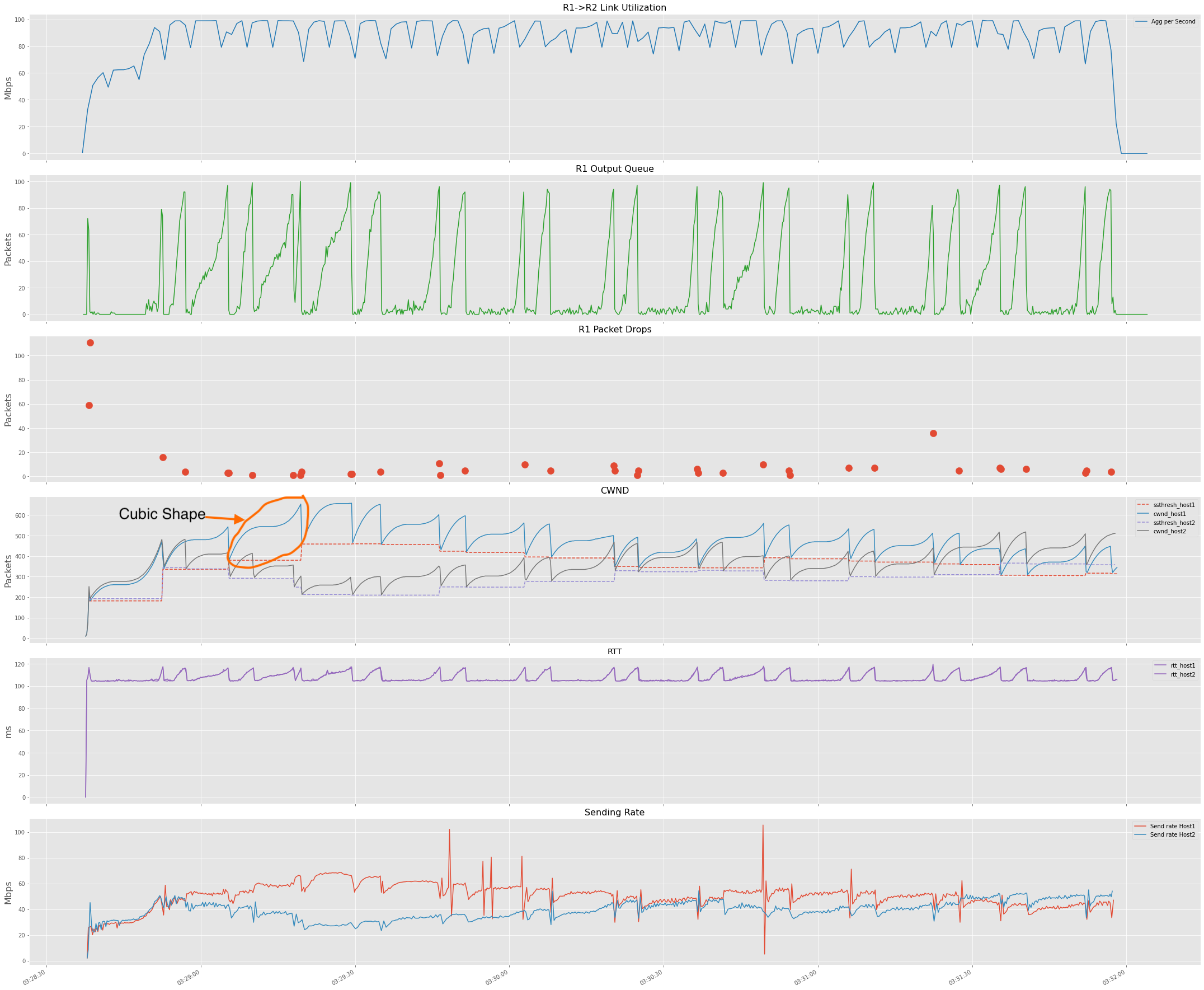 If we re-run the experiment with Host1 (H1-H3) running TCP Reno and Host2 (H2-H4) Cubic, we observe that TCP Cubic gets more bandwidth share. You can clearly see the differences in how the reno and cubic cwnd window growths. 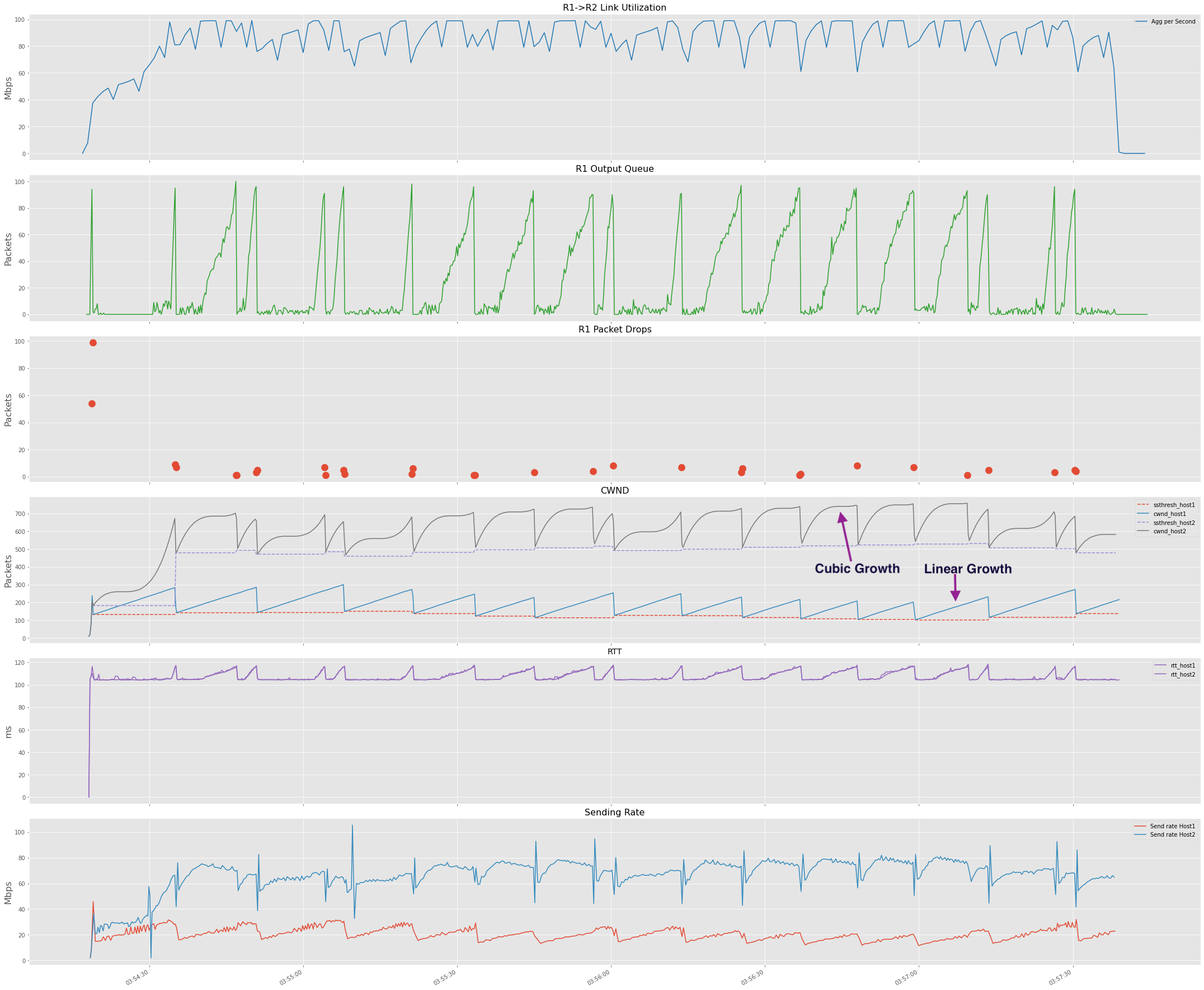 The BBR congestion control algorithm takes a different approach and does not assume that packet loss signals congestion. BBR builds a model of the network path to avoid and respond to actual congestion. In the case of BBR, at any given time, it sends data at a rate independent of current packet losses. This is a significant shift from traditional algorithms based on the AIMD rule, which operated by reducing the sending rate when they observed a packet loss.

BBR uses pacing to set the sending rate to the estimated bottleneck bandwidth. The pacing technique spaces out packets at the sender node, spreading them over time. This approach is a departure from the traditional loss-based algorithms, where the size of the congestion window establishes the sending rate, and the sender node may send packets in bursts up to the maximum rate of the sender’s interface.

The below figure describes the behavior of BBR, which show that BBR tries to operate at the optimal operating point, which is the Bandwidth delay product (BDP) highlighted in green, vs. the traditional algorithms, which operate at the BDP+Buffer size. 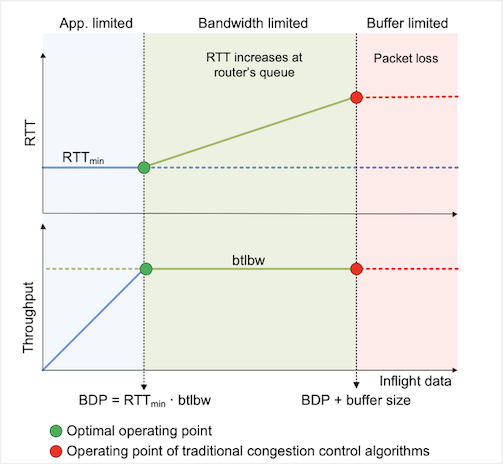 Currently, TCP BBRv2 is in the beta stage, which addresses some BBRv1 shortcomings, like unfairness to other TCP Cubic flows. 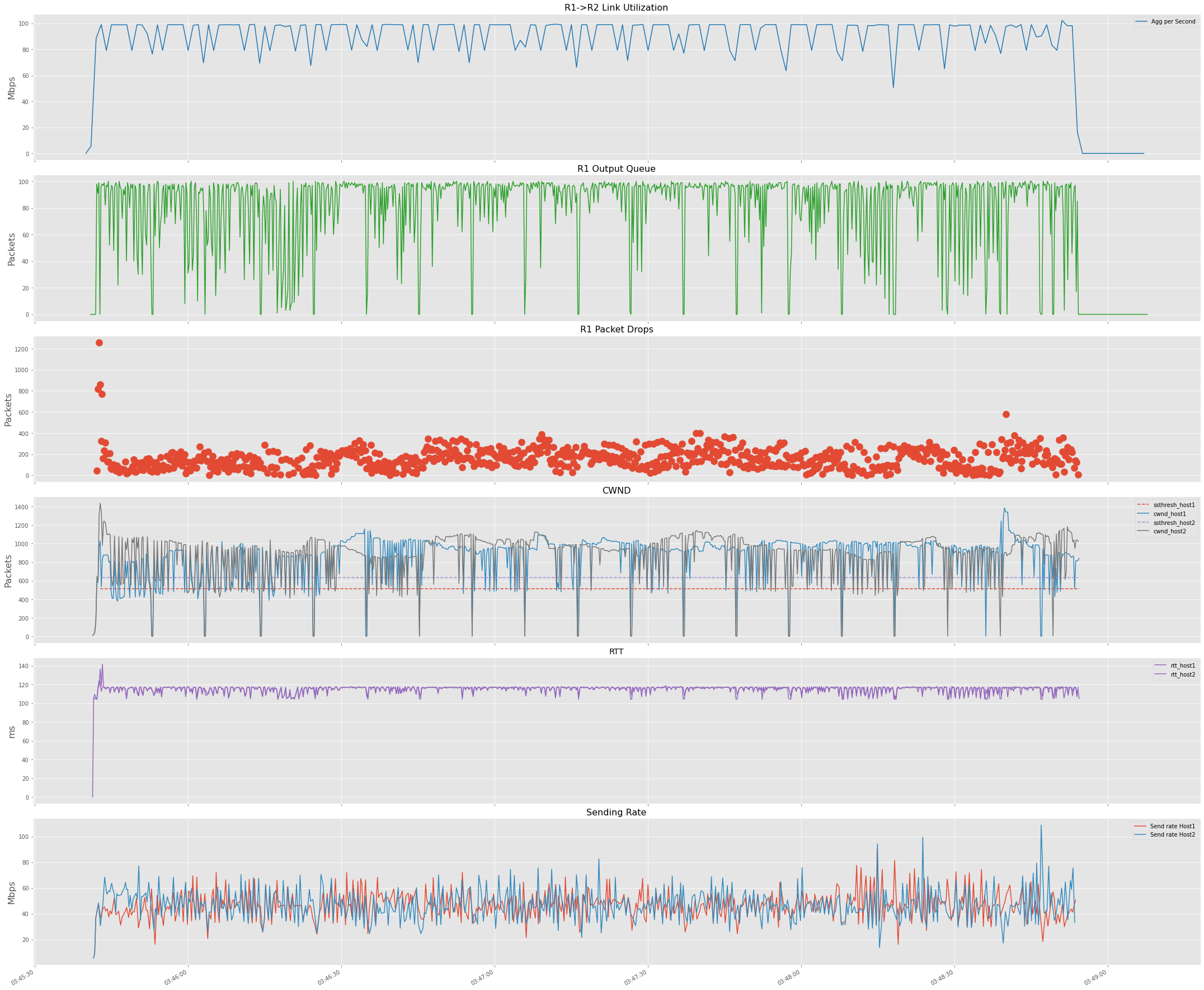 Now, if we change one session (H1-H3) from the previous experiment to TCP Cubic, we observe that BBR takes a fair share of the network bandwidth. This is due to buffers being less than BDP and TCP BBR not reacting to Loss while Cubic reacting to the packet loss and reducing its rate and thus ending up starved. 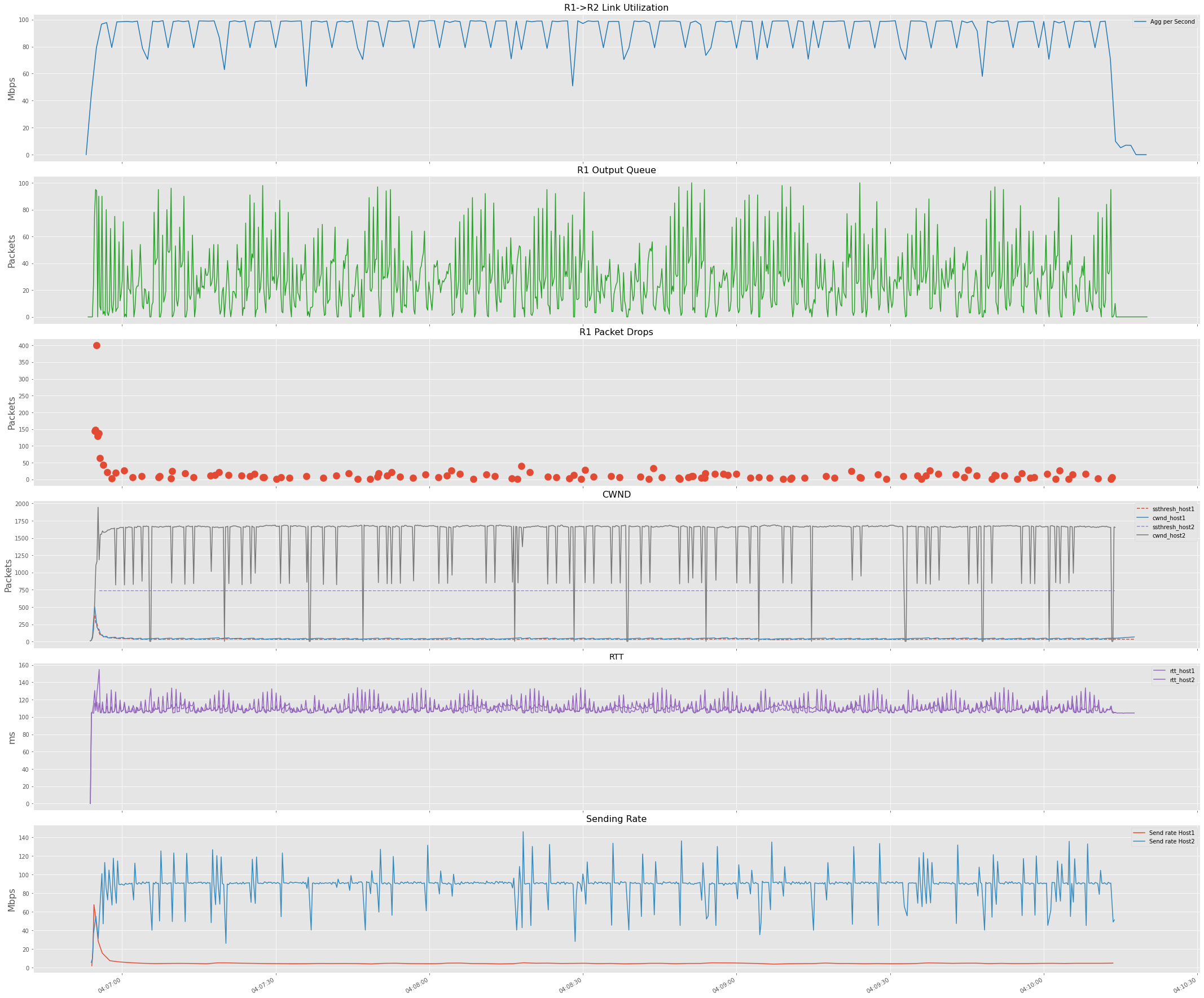 Let’s repeat the above experiment after increasing the buffer size on the router to 1000 Packets. Now we see a better resource sharing between BBR and Cubic. 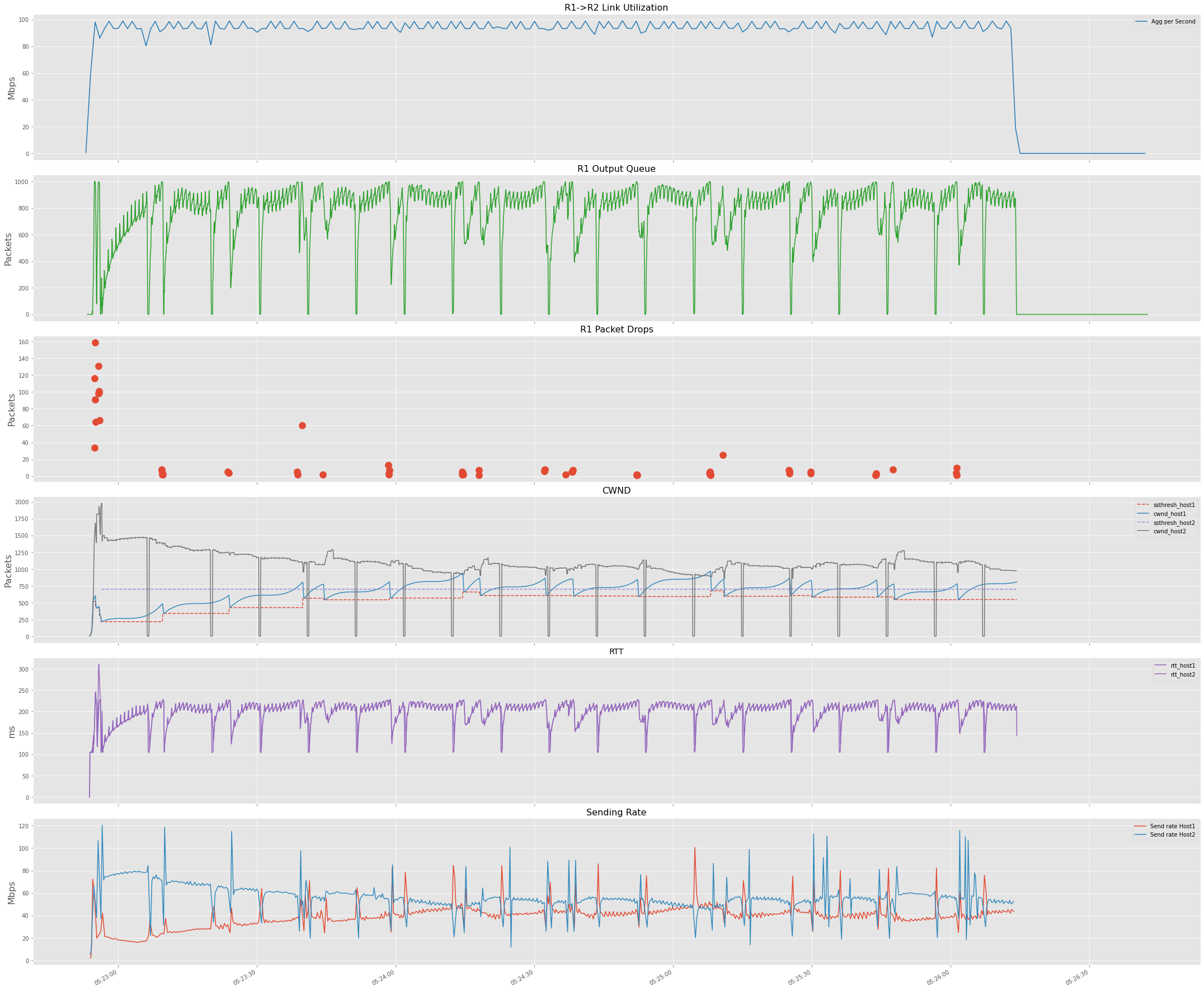 In this blog post, we started with TCP Reno and looked at how Reno sessions are fair to each other and their bias towards RTT. Then we looked at TCP Cubic, differences in Reno vs. Cubic cwnd growth behavior, and how Cubic fairness compared to Reno. Then we finished with BBR and saw how the sending pace doesn’t slow with packet loss, and it’s unfairness towards Cubic with smaller buffers.