Network design discussions often involve anecdotal evidence, and the arguments for preferring something follow up with “We should do X because at Y place, we did this.”. This is alright in itself as we want to bring the experience to avoid repeating past mistakes in the future. Still, more often than not, it feels like we have memorized the answers, and without reading and understanding the question properly, we want to write down the answer. Ideally, we want to understand the problem and solution space and put that into the current context, discussing various tradeoffs and picking the best solution in the given context. Our best solution for the same problem may change as the context changes. Also, this problem is everywhere. For example: Take a look at this twitter thread

Maybe one way to approach on how to think is to adopt stochastic thinking and add qualifications while making a case if we don’t have all the facts. The best engineers I have seen do apply similar thought processes. As world-class poker player Annie Duke points out in Thinking in Bets, even if you start at 90%, your ego will have a much easier time with a reversal than if you have committed to absolute, eternal certainty.

We will start with the most basic topology to understand various metrics for a convergence event using Node Failure as a trigger event. In the below example, we have a simple 3-level Fat-Tree with a radix of 2. We will use FRR based eBGP for routing. One thing to note is that Sibyl refers to T3 switches as the Top of the fabric (tof). For type of failure test, we will assume Node failure and fail leaf_1_0_1. 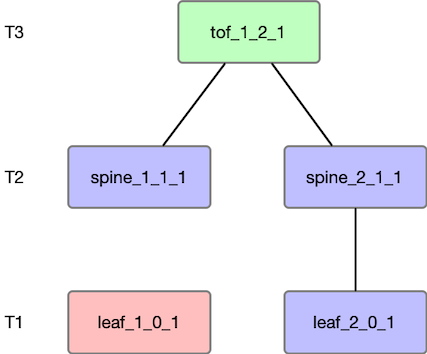 The routing stack is FRR. One behavior to remember with FRR/eBGP is that an ebgp neighbor advertises the routes back to its neighbor from whom it learned, which will eventually get rejected due to the AS-Path loop. This is important because it impacts the number of packets getting injected as part of a convergence event.

For example, if we have three routers R1 - R2 - R3 using eBGP peering. You can see in the below output how R2 is advertising the R1 learned route back to R1. when R1 stops advertising its 10.0.0.1/32 to R2, we will see two BGP withdraws between R1 - R2.
R1 will send one BGP withdraw to R2, and R2 will send a BGP withdraw to R1. If you are curious about why that behavior is, refer to this thread.

If we look at the BGP events at R3, When the prefix is unreachable on R1, R3 receives a withdrawal from R2 and then sends another withdrawal back to R2.

The Sibly methodology includes failure and recovery tests. Failure tests include common faults like a node or link failure and measure how a routing protocol implementation reacts to those failures. For a given test, it verifies that the fabric has converged, measures the messaging load induced as part of the event, the blast radius (locality) of the messaging load, and the Number of rounds it took for the implementation to converge.

The framework avoids time synchronization issues by using a logical clock and only counts the relevant PDUs to the event. 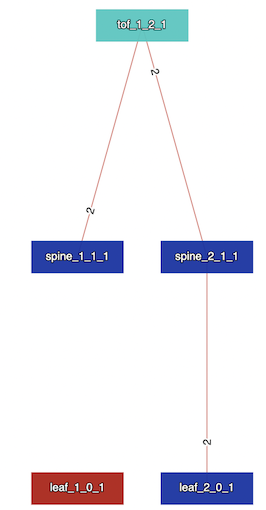 In the above diagram, we can see 2 for each link as a result of 2 withdraws between each eBGP adjacency giving us a total score of 6 for messaging load.

Sibyl measures the blast radius of a failure or recovery event by applying the following steps:

We can use this to measure the blast radius impact for a routing protocol and see how it changes as the topology grows.

In our example, each link observes two withdraws. This gives us a Blast Radius score of 12.

One problem with just counting aggregate packet counts is that it doesn’t provide insight into how much back and forth happens as part of the convergence event. State Rounds try to capture these waves of packets transmitted as part of a convergence event. First, it builds a Node State timeline, a timeline of packets sent or received by each node during the failure event. An arrow represents the packets being sent from one node to another node.

Below is the Node-state timeline for our topology. The horizontal axis is the timeline, the vertical axis is the fabric nodes, and the arrows represent the packets being sent from one node to another.

From the above Node-State timeline, it builds a Node state graph G, in which the edge captures how the Nodes transition between states. In the Node-State timeline, We can see how Node 111(spine_1_1_1) sends the packet to tof_1_2_1, which then sends the withdraw back to spine_1_1_1. This is also represented in the Node-State graph. From the Node-State graph, we can count the maximum number of edges, which is 4. This tells us that the convergence event takes four rounds to complete. This is fascinating, as graph depth gives us a metric for the number of waves it takes for a protocol in a given topology to converge. The number of vertices in the graph indicates the overall amount of state changes induced by an event.

I think this is super useful as we can measure flooding events in topology, the impact of any flooding improvements claimed by a protocol, compare various protocols and see how noisy they are, etc.

The below plot shows the Messaging load (Number of packets induced) due to single leaf device failure. The X-axis contains the fat-tree type and the number of nodes in that fat tree. For example, a 2_2_2_(10) is a fat-tree with 10 Nodes. It is expected that messaging load will increase as the size of the fat tree grows, but you can see how that differs among various protocols. 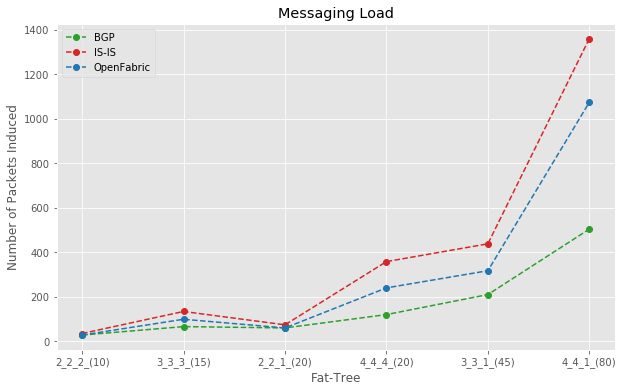 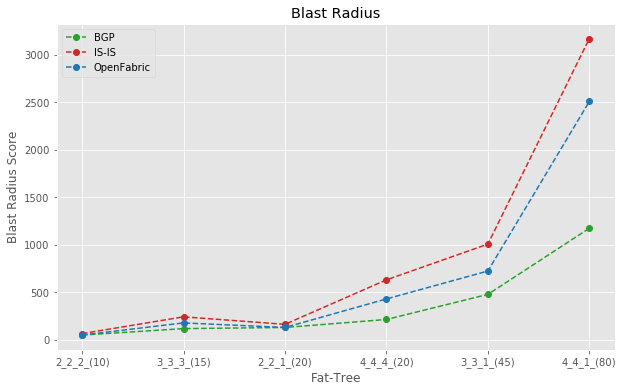 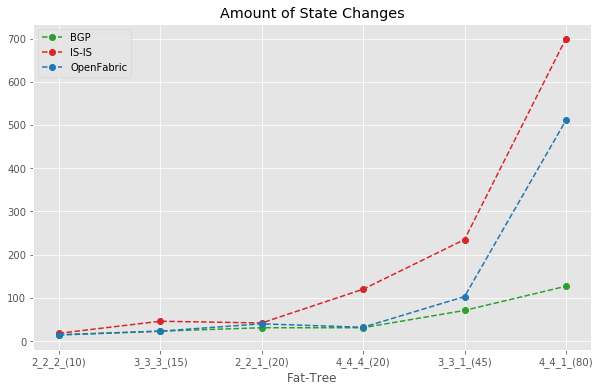 This measures how many cycles of waves and backwashes happened before the network converged. BGP held pretty steady in this regard, and IS-IS/Openfabric was chatty. 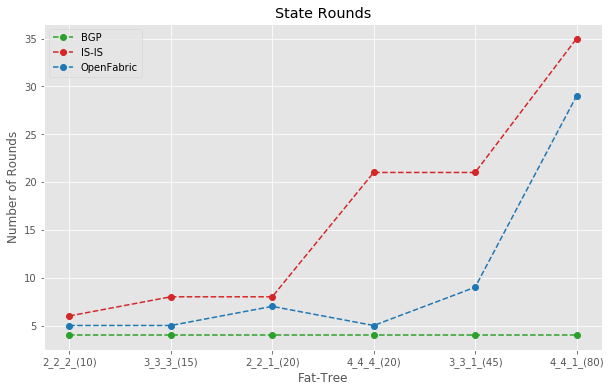 I want to thank Tommaso Caiazzi, for helping me sort out some initial glitches with Sibyl, and many thanks to him and the team for creating Sibyl.