You may or may not have already heard about the Five Number summary for a dataset. It’s basically a set of descriptive statistics for a given dataset, which provides an idea about the dataset. Those are:

Similarly, there are specific statistics about topology, which gives an idea about any network topology. The ones which I think the most essential are:

We will be using Cogent topology, which is publicly available here to follow along with our examples. The map represents the nodes in US + Mexico, and European countries.Each node color represents a specific country.

You may have already noticed that in the graph, each city is represented as a Node. In reality, any city will have many routers, which will make the topology a lot bigger and more attractive. For our purposes, the current topology abstraction provides the right balance where it’s not huge to overwhelm the reader but big enough to keep things interesting.

A Graph consists of nodes and links connecting those nodes. An obvious thing to say is that the maximum links a graph can have are bounded by its nodes. This means the maximum number of links a network can have can be given by the number of nodes. A Complete Network is the one which has all possible pair of nodes connected by links.

A maximum number of links in an Undirected network with \(N\) nodes, can be given by:

We know what the max links a graph can have, but the actual links can be that or less. The links which actually exists in the network is known as the density of the network. A Complete network will have maximal density. If the network’s density is much smaller than maximal links, we called this sparsity. Most of the networks we see in real life are sparse.

Density of the Network is given by:

We can substitute \(L_{max}\) in the equation and get

Let’s look at the average degree of nodes in our Cogent topology.

The average node degree for our cogent topology is around 2.48. This means on an average most nodes are connected to 2-3 neighbors. Let’s plot the degree distribution of our graph and see how it looks like:

You can observe that the maximum nodes have degree = 2 (peak), and it has a thin tail on the right with very few nodes with a high degree of 6,7,8 and 9.

In our simple case, all links between nodes were equal. We didn’t provide importance to any given link over another. But some links may be more important than others, and we may provide the weights to them (e.g., IGP Cost/Link Capacity). The weighted degree of a node is like a degree but ponderated by the weight of each edge. For instance, a node with 4 edges with weight 1 each(1+1+1+1) is equal to a node with 2 edges with weight 2 (2+2).

Assortatvitiy is a property of the network where nodes with similar features are connected together. We see this property in social networks all the time where people with similar interests are friends a.k.a connected to each other. This is also captured by the popular saying that “birds of a feather flock together” and technically it’s called as Homophily.

There are two ways to measure degree assortatvity of a network, both based on measuring the correlation between degrees of neighbor nodes. 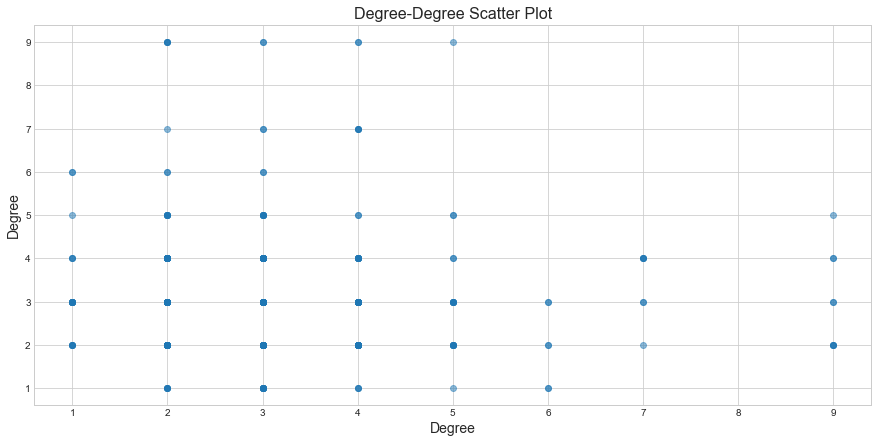 The diameter of the network is the max shortest path length across all pairs.

The Average shortest path length for our example topology is 10.5 hops.

A small world property is a popular notion that social distances are short on average. For example, If I just consider the network engineer population, If I have to guess, then most of the engineers are either 3 or 4 connections away from any other engineer. Some famous folks will act as Hubs, and most folks will be connected to them.

This is also known as “six degrees of seperation” where the idea is that all people on average are six or fewer connections away from each other. This also means that the circle of our friends of friends is vast than we think. We often say this when we run into people again or know someone in common that it’s a small world.

It turns out that when our Average Shortest Path length grows slowly with the size of the network, then we consider the path lengths to be short. We can express this mathematically.

A clustering coefficient is the average probability that two friends of a node are also friends. In other words, It’s the ratio between the number of triangles that include the node, and the maximum number of triangles in which the node can participate.

It’s formally given as:

where \(\tau (i)\) is the number of triangles involving i. The Clustering Coefficient of the entire network is the average of the clustering coefficients of its nodes:

Nodes with degree K < 2 are excluded when calculating the average clustering coefficient.

The clustering Coefficient for our Topology is low indicating little to no clusters in our topology.

We looked at some essential properties of Network Topologies. Five Number summary for our Sample Topology

These properties can be used to assess various network topologies and understand the deep structure while doing topology design. In the next upcoming posts, we will look at more network science aspects, meanwhile, how does the above five summary number look like for your network?